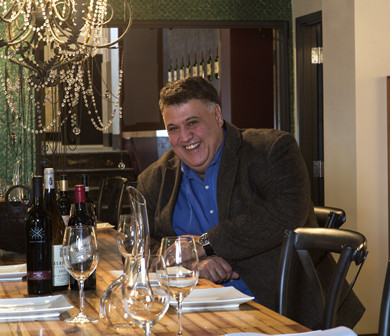 Jim Lutfy started selling wine from his family’s small business, Cloverleaf Market, over 40 years ago. At Cloverleaf, he was recognized by several publications, including Market Watch Magazine, Wine Spectator Magazine, Detroit Free Press, and Crain’s Detroit Business, as an industry leader in the retail wine business throughout the country. After attending Oakland University, he began working full time at the market. At Cloverleaf, he developed a wine program that was unique to the state. He was a merchant that went after the market’s high end and decided to create an environment that would beat the competition every time when it came to personal service and knowledge about wine.

Jim and his wife, Livvie, are so devoted to wine and spirits, they named their daughters, Remy and Margaux, after their favorite cognac and French wine, and their late dog Piper, after Piper Heidsieck champagne. Livvie became interested in wine after meeting Jim, and realizing the love affair he had with the art form. Livvie has since worked at the store, helping with day-to-day operations and expanding marketing efforts. In 1993, Jim moved his business to Livonia, opening Fine Wine Source. Here, he continues to spread the word about wine to his loyal customers. Jim and his daughter, Remy, have always had the dream to open a wine store, restaurant and wine bar. This dream laid the foundation for Vertical Detroit.